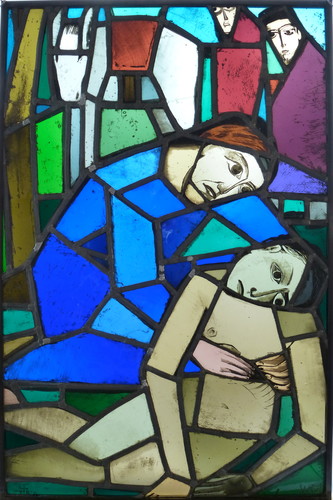 Eduard Friedrich Renggli was born into a family of glass-painters in Lucerne and learned his craft from his father Eduard Renggli (1863‑1921). After the latter’s death, Eduard Jr continued to run his father’s workshop, helping it to achieve international recognition. Eduard Jr’s son Edy (b.1922) ran the business from 1954, until he handed it on to his nephew Christoph Stooss in 1991.

Although Eduard Friedrich remained true to traditional glass-painting, he was also capable of developing and executing works in a broad and innovative repertoire of styles. Though for his American clientele he executed principally individual panels after Renaissance and Baroque models, he also created contemporary windows to his own designs, often in collaboration with other artists, in Classic modernist and Expressionist vein.

A selection of significant works by him in Switzerland may be found in the Nidwalden canton, at the monastery and monastery church at Stans, and in the Lucerne canton, at the parish churches of Römerswil and Menznau; the Church of the Holy Blood (Willisau); and the Schützenhaus and the Zunft zu Safran (Lucerne).