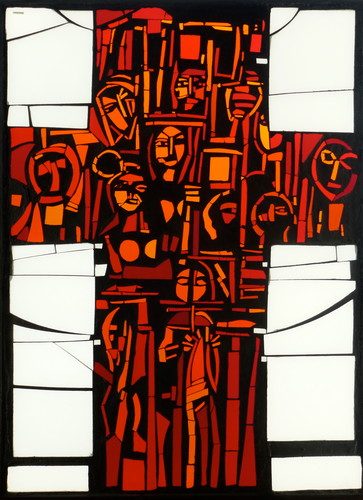 Born in Liebersdorf in Schlesien, Walter Opitz trained as a theatre painter, and after finishing his studies in 1947 worked as a set designer, for East German television among others. At the same time, he turned gradually to painting, graphic art, and the execution of stained glass. There is a particular emphasis in his output on panel paintings with human figures and landscape painting.

Form 1973 onwards, Opitz created flat-glass pictures, for example for the twinned cities of Linz and Oulu (Finland), as well as twenty pictures on glass for the firm Geologische Forschung und Erkundung (Geological Study and Research) in Halle. His numerous intensive study trips took him through the continent of Asia and provided stimulus for his considerable technical and artistic delight in experimentation and versatility. The panel "City Dwellers" is an excellent example for this character.