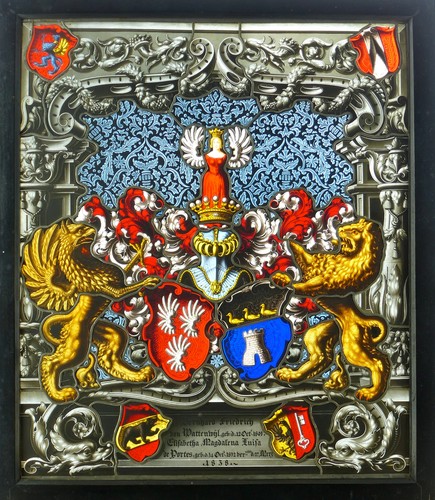 Johann Rudolf Wyss (1781–1830), poet and co-founder of the Bern artists’ society, penned an article on ‘recent glass-painting’ for the Berner Kunstblatt (Bern Art Newspaper) in 1826.

‘No country has produced as many artists in this field as Switzerland. For some time now, interest in these depictions has been growing; they were formerly considered stiff and old-fashioned, and therefore received little attention, but they now are held to be instructive, for their costumes, weaponry, genealogies, and other incidental details. With the arrival of hordes of visitors in the Swiss Alps, demand for old panels has grown so much, that a real trade has developed as a result. In addition to the leading role it plays in relation to old stained glass, Switzerland now, in the person of Johann Jakob Müller (1803–1867), rocks the cradle of the reborn art of glass-painting, which Müller has brought to a level of perfection not previously achieved.’ (Quoted from Daniel Hess, ‘Die “Schweizerscheibe” und die Konstruktion einer helvetischen Nationalkultur’, Helvetische Merkwürdigkeiten: Wahrnehmung und Darstellung der Schweiz in der Kunst- und Kulturgeschichte seit dem 18. Jahrhundert, ed. Edgar Bierened, Sibylle Hoiman, Anna Minta and Matthais Noell, Bern, 2010, p. 182).

The Müller family of glass-painters came from Schaffhausen. It is reported of Johann Jakob and his brother Georg that they manufactured glass and produced flashes in all colours, as well as ‘carrying out experiments in the kiln with broken pieces of old stained glass’. After three years of experimentation, Müller père (an indienne printer and silk dyer) took himself off to a glass-manufacturing workshop in the neighbouring Black Forest, where he produced brightly coloured panels using substances mixed by his son Jakob, and was able successfully to fire drawing, figures, and decorative passages onto glass, again benefitting from a familial contact, his son. Johann Jakob Müller owed the splendid colouration of his work to this delight in experimentation. In 1823, Müller moved to Bern, and founded a workshop there with his brother Georg. (After Elgin Vaassen, ‘Die Familien Müller und Beck’, in Bilder auf Glas: Glasgemälde zwischen 1780 und 1870, Berlin, 1997, pp. 45f.)