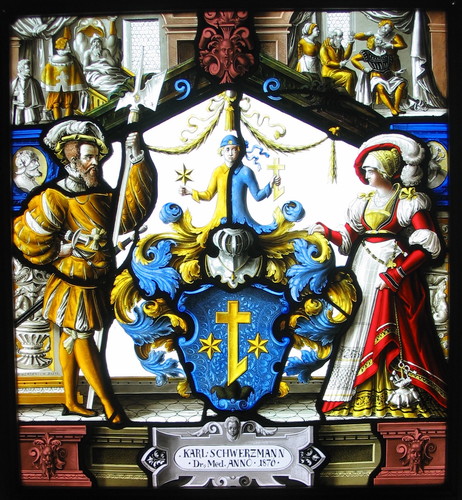 Franz Joseph Merzenich came from Barmen-Merzenhausen in Nordrhein-Westfalen. After working with Jakob Kuhn (1845–1888) on the restoration of the sixteenth- and seventeenth-century stained glass of the civic militia headquarters in Basel, he opened his own workshop in Kleinbasel (the area of Basel that lies on the eastern bank of the Rhein).

Merzenich’s particular talent lay in the manufacture of armorial panels that were closely modelled, in both their style and graphic perfection, on Renaissance designs for glass and stained-glass panels. The series of panels in the guild hall of the E.E. Zunft zum Schlüssel (the Basel merchants’ guild) stems mainly from his hand.