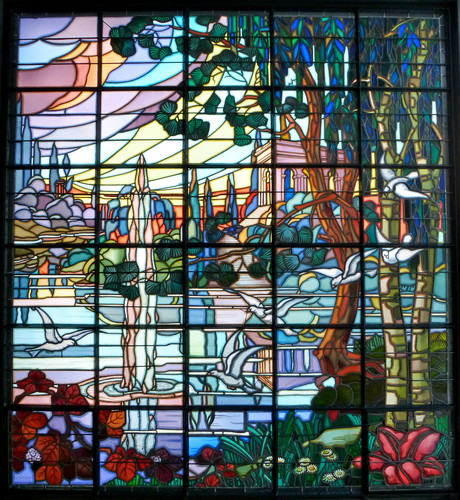 Jules Pierre Mauméjean (1837-1909) was the first glass-painter in the family, and in 1862 he founded a studio in Pau.
In 1890, he set up a new workshop in Anglet, and three years later another one in Biarritz. This move into the Basque country was an important turning point in the family’s history: contacts were developed with the large population of Spanish refugees in the south-west, which in turn led to contacts with the Spanish royal family. In 1882, Jules was created royal painter to the court of Alfonso XII. His marriage to Marie Honorine Lalanne produced five children, four sons and one daughter: Joseph Jules Edmond (1869–1952), Jean Simon Henri (1871–1932), Léon Ernest Thomas (1878–1921), Charles Émile Joseph (1888–1957), and Marie Thérèse (1882–1954). The father Jules Pierre created numerous leaded glazing schemes in Béarn and Spain. Around 1895, he opened a studio in Madrid; studios in Barcelona and San Sebastian followed. In 1908, the three Spanish branches joined together and formed a firm with the name S.A. Maumejean Hermanos.
The first two sons worked in the south of France and Spain: Joseph (also known as José) from 1920 in Hendaye, and Jean (also known by his third name, Henri) in Madrid. Charles (also known as Carl) was active from 1921 in Paris, where he had opened a workshop at 6/6bis, Rue Bezout (in the fourteenth arrondissement).

The firm reached its apogee in 1925, when the Mauméjeans participated in the Exposition internationale des Arts décoratifs et industriels modernes (‘International Exhibition of Contemporary Decorative and Industrial Arts’) in Paris, during which they had their own pavillion on the Quai d’Orsay, built by the architect Henri Mulhaupt (see illustration). On this occasion, the workshop was awarded first prize for two windows, Le Luxe (‘Luxury’, see illustration) and Les Arts (‘The Arts’). This artistically and technically highly ambitious and powerful stained-glass manufacturing business received numerous commendations at international exhibitions in France, Spain and the United States of America, and there are examples of their creative output in twenty-five countries.

Literature
Benoit Manauté’s doctoral thesis – ‘“Flambe! Illumine! Embrase!” La place de la manufacture de vitrail et mosaïque d’art Mauméjean dans le renouveau des arts industriels franco-espagnols (1862-1957)’ ‘“Flambe! Illumine! Embrase!” The Place of the Mauméjean Stained Glass and Art Mosaic Manufactory in the Renewal of Franco-Spanish Industrial Arts (1862–1957)’ – was completed in 2012. A publication is in preparation and is supposed to appear in June 2015. Based on a rich stock of archival material and works extant in France, Spain and the United States, this study reexamines production methods and reassesses the artistic contribution of the workshop, which constituted a notable success story and was actively involved at the emergence of Franco-Spanish industrial art.