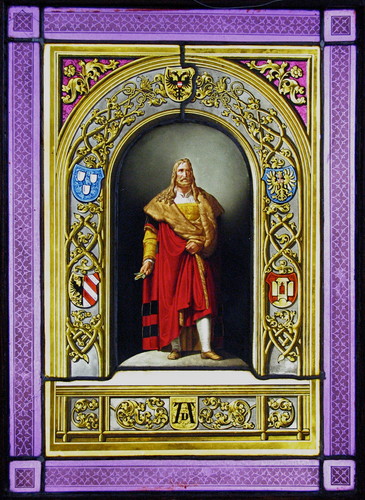 Georg Konrad was the eldest of four sons of the porcelain painter Johann Jakob Kellner (1788–1873), the founder of the famous Nuremberg glass-painting dynasty. Initially, until about 1847, he worked with his father and his brothers Stephan (1812–1867), Gustav Hermann (1814–1877), who later settled on Lake Constance, and Johann Michael (1825–1859). After this he apparently spent a year in Paris. From 1848, he was castellan of Nuremberg Castle, and set up his own independent workshop. The Kellners constituted the first large glass-painting concern in Franconia.

As was normal for the family, Georg executed a series of small-format windows after graphic works by Albrecht Dürer (1471–1528) and Hendrick Goltzius (1558–1617) in the early stages of his career; he later also produced monumental church windows. He was equally active, together with his family, in the field of restoration, moving between many churches in southern Germany and Switzerland.

Through the agency of the architect and monument curator Alexander Heideloff (1789–1865), the family received a commission from the Portuguese royal family (Sachsen-Coburg-Gotha 1837–1910) for the glazing of Belem Monastery near Lisbon, now a world heritage site; they received a further commission for the Palácio Nacional da Pena in Sintra, which included portraits of King Manuel I (1469–1521) and the famous navigator Vasco da Gama (1469–1524).